The two Vittore Carpaccio paintings purchased by Bishop Josip Juraj Strossmayer in 1872 in Milan for today's Strossmayer Gallery of Old Masters of the Croatian Academy of Sciences and Arts in Zagreb were in 1942 exchanged for the so-called Baptismal Font of Duke Višeslav, which had been transferred from the Venetian monastery Il Redentore to the Correr Museum in the year 1853. An object with strong symbolical significance, it entered Croatian historiography in the 19th century as the baptismal font of the first Croatian national rulers, estimated to date from the 800s, and originally located in the small church in Nin, near Zadar, which had been was one of the most important political, cultural, and religious centers of the old Croatian nation of the time. This Baptismal Font had become ‘an object of compensation’ in the World War I restitution negotiation process, although it was not originally included in the restitution lists. 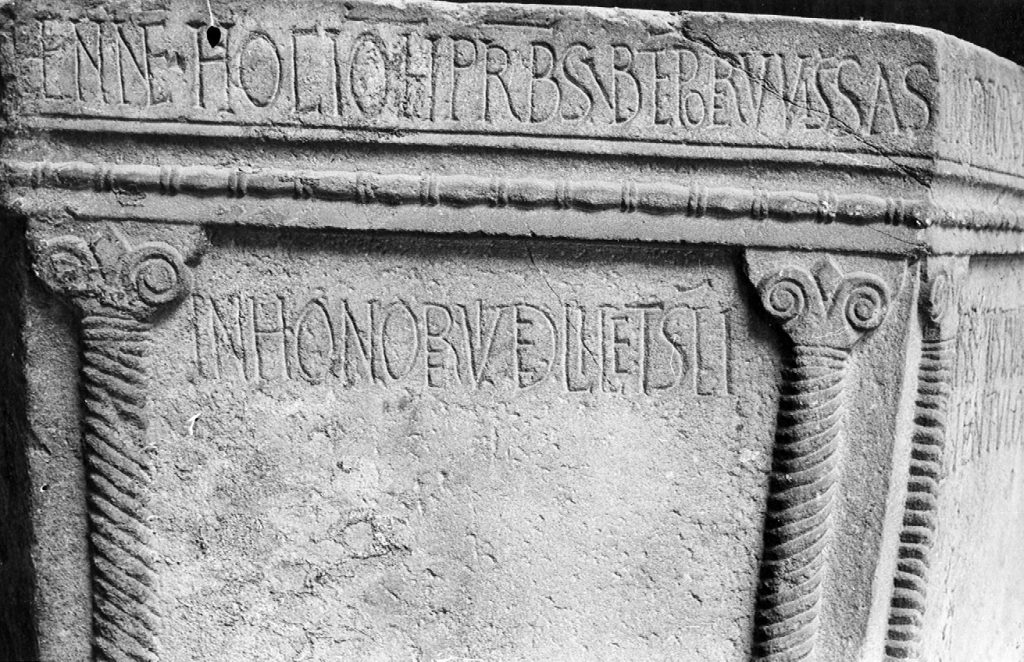 Documentation on the restitution process has been preserved in the Strossmayer Gallery Archive in Zagreb. Dating from 1938, these documents were created or compiled, when the Italian government renewed their claim for the return of Tiepolo’s drawings from the Sartorio Collection in Trieste, which had been left in Ljubljana during the First World War.

In 1838, the German magazine Die Weltkunst published a short story about the Italian claim, and Artur Schneider, director of the Strossmayer Gallery at the time, felt invited to respond. Schneider’s official letter issued to several addresses held a warning that the drawings must not be returned until the restitution of “all those artworks of ours which were detained in Italy after the upheaval”. 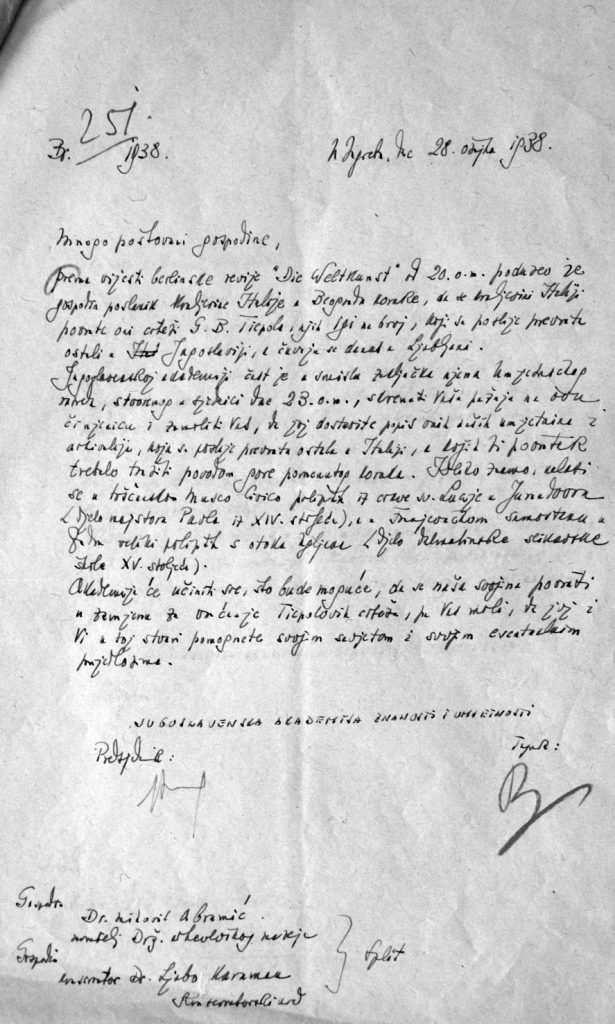 Abramić’s report contains information on the proceedings of the action and a detailed list of artworks whose restitution was sought.

The objects of the negotiations were divided into three groups: historical documents that were left in Zadar as the “former capital of Dalmatia”, objects that the Italian army seized during the occupation of the so-called “third zone” in northern Dalmatia, and finally, artworks which came into temporary Italian possession “by chance”, due to the post-WWI redefinitions of state borders. Even though an uncontested return was sought for the final group of objects, some items were singled out that were not sought back, but for which an exchange was proposed for the so-called Baptismal Font of Duke Višeslav, as an “object of compensation”.

At a meeting held in July 1926 in Trieste, Abramić discussed all the claims with the Italian referent of the Yugoslav-Italian commission, Ettore Modigliani. Abramić explained the reasons behind this suggested compensation: “this object is a monument of great value to our national history, while to the Italians it represents nothing.” Modigliani then promised that he would “intercede for our justified requests and wishes”, informing Abramić in the fall of 1927 that “the president of the Italian government, Mr. Mussolini himself, got involved in the question of the restitution of your artworks, and promised to serve as intermediary with the Venetian local government, so that the Baptismal Font be returned”.

Although the initiative to transfer the Baptismal Font to Croatia in the framework of the post-WWI restitution negotiations was never abandoned, the transfer was finally realized only in the course of the Second World War.

In 1941, Zagreb’s Archbishop Alojzije Stepinac personally interceded for the transfer of the Baptismal Font to Croatia with the Venetian Cardinal Piazza, who suggested that this should be done through the Ministry in Belgrade. This action was soon interrupted by the German occupation of Yugoslavia and the establishment of the Independent State of Croatia. Therefore, in May of 1941, Stepinac addressed Milo Budak, Minister of Education in the newly established State in Zagreb: “He conveyed to him what he had, until that point, achieved in this matter, as well as the fact that he had received a visit from Venetian professor Ponti, who is currently staying and working in Zagreb, letting him know that this will be easiest to achieve if the Font was exchanged for a painting by one of the Venetian painters. On 13th of September, the Archbishop received a notification from the ‘Istituto di cultura italiana’ in Zagreb, imparted to him by professor Ponti himself, that the Mayor of Venice, along with the Board of the city museums of Venice, accepted his suggestion to perform the proposed exchange. Two paintings by Carpaccio, owned by the Strossmayer Gallery in Zagreb, will be given to Venice in exchange for the Baptismal Font of Duke Višeslav.” (Aleksa Benigar, Alojzije Stepinac: hrvatski kardinal, Rome, 1974, p. 251)

Giovanni Ponti
(Venice, 1896 – Padua, 1961)
The subsequently respectable Mayor of Venice resided in Zagreb 1940-42 as a professor and lecturer of Italian at the Faculty of Philosophy.

1942 Decree on the Exchange

In February of 1942, the Croatian Academy of Sciences and Arts, under whose authority the Strossmayer Gallery operates, received the decision of the Head of the Independent State of Croatia, Ante Pavelić, which he had sent to the Ministry of Education, in which he asserts that “the exchange is to take place according to the modalities that will be subsequently determined.” (Minutes of the Gallery Committee session, February 21, 1942. SGA, Box 4, 1939-1943, 1942)

Pavelić’s decision gained legal power as an official Decree on the Exchange of Two Paintings by Vittore Carpaccio from the Croatian Gallery of Sciences and Arts in Zagreb for the Baptismal Font of the Croatian Duke Višeslav from the Museo Civico Correr in Venice, issued on 22nd May 1942.

Saint Peter the Martyr and Saint Sebastian were transferred from Zagreb to Venice, the Baptismal Font was transferred from Venice to Zagreb, together with the painting Saint Simeon, gifted by the Museo Correr to the Strossmayer Gallery in the occasion of exchange.

On the occasion of the transfer of the Font to Croatia, Ljubo Karaman, former Head of the Conservation Office in Split, and in 1942 Head Conservator for Croatia, accepted “the assumption that it [the Font] was used in the solemn rite of baptizing Croatia’s people and leaders around the year 800.” He continued by saying: “This imbues the Font with great significance for the Croatian people. The baptizing performed in this Font took the Croatian people into the light of history, and into the realm of enlightened nations. This Font began the uninterrupted sequence of endowments and monuments connected to the lives of the Croatian people on the eastern shores of the Adriatic. […] On the occasion of the first anniversary of the establishment of the Independent State of Croatia, Duke Višeslav’s Baptismal Font returns as an ancient rarity to the Croatian people, and into the Croatian Academy in Zagreb.” 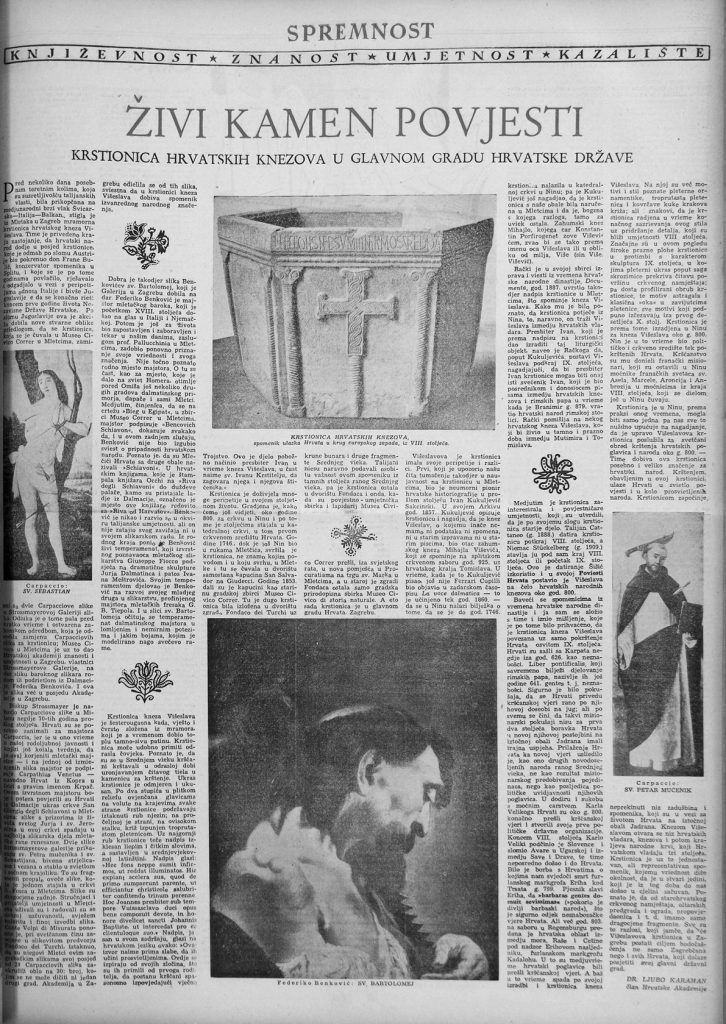 The Font was exhibited at the Academy’s doors, while students of Zagreb’s schools walked in a parade in front of it: “The Ministry of Education is planning to hold a parade in front of the Baptismal Font of Duke Višeslav on Sunday, 30th August, at 10 a. m., participants of which will be students from primary and secondary schools of Zagreb. Students will march in front of the building of the Croatian Academy of Sciences and Arts and, looking towards the Font in proper stance and form, show due tribute and respect with their right arms held in salute.” (Ministry of Education to the Croatian Academy, August 27, 1942. HAZU Archive, Box 82, 1942)

The transfer of the Font to Zagreb was hereby presented as a pompous public display, whose aim was to legitimize the new political regime and its alliance with fascist Italy.

The exchanged objects were further dealt with in the post-WWII years. Negotiations terminated in 1961, by signing the “final agreement between the Federal National Republic of Yugoslavia and The Republic of Italy” on 15th September 1961.

The Baptismal Font has stayed in the Museum Of Croatian Archaeological Monuments in Split (where it was transferred from the Croatian Academy in 1958), Saint Peter the Martyr has stayed in the Museo Correr in Venice, while Saint Sebastian has been returned to the Strossmayer Gallery, where the painting Saint Simeon gifted by the Museo Correr during the exchange of 1942, has also remained.